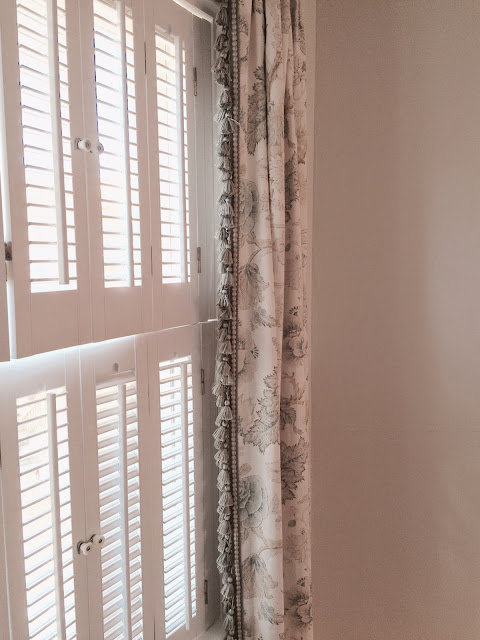 I took a long absence from blogging this summer, although I didn't really plan to.  Sometimes it was hard to find inspiration about blogging when we were working on the house and things were messy.  I spent most of the spring and summer working on our bedroom.  It needed every thing from paint to carpet, but it was a fun project--choosing fabric and finding just the right touches to brighten the room.  I can't wait to start work on the second bedroom!  Here are the before and after photos of our bedroom. 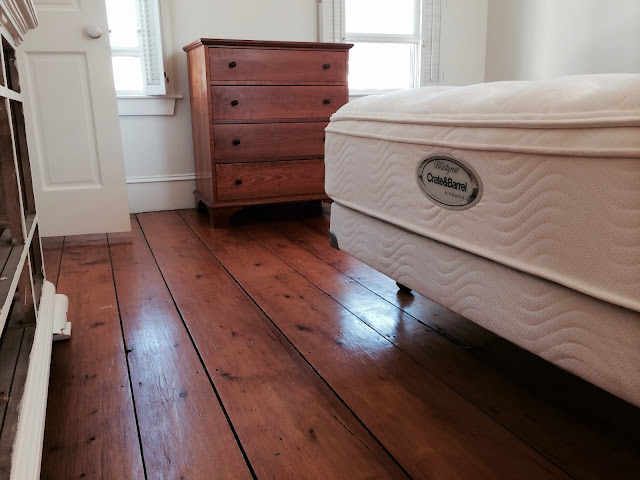 The house was built in 1875 and none of the original features remain, except for the pine floor.  They don't look bad here, but they were old, worn and had wide gaps between the boards, which were a magnet for dust.  To create a warmer and brighter look, I had the floor covered with wool wall-to-wall carpeting. You can see my bureau on the left, which isn't may favorite piece of furniture, but it provides plenty of storage in this house with few closets.  I decided to paint it white to blend with the walls since it originally had a dark stain finish. 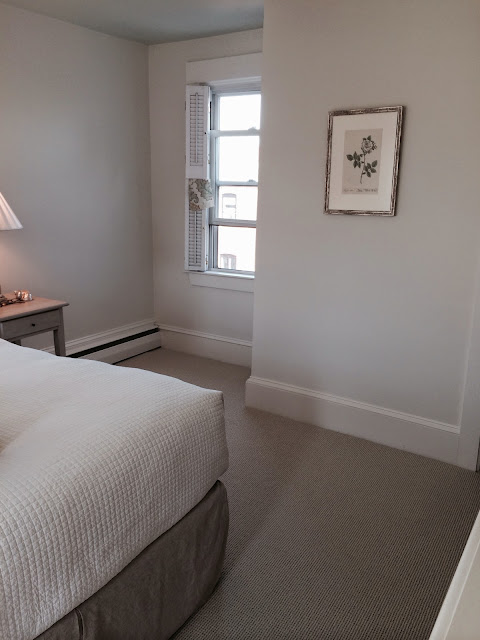 Here's the room with carpeting.  It's not as dark as it looks here.  It's actually a blend of cream and pale aqua fibers.  The aqua is very subtle and soft.  The ceiling is painted pale blue and it nicely complements the carpet.  Jon liked the carpet too, which surprised me. 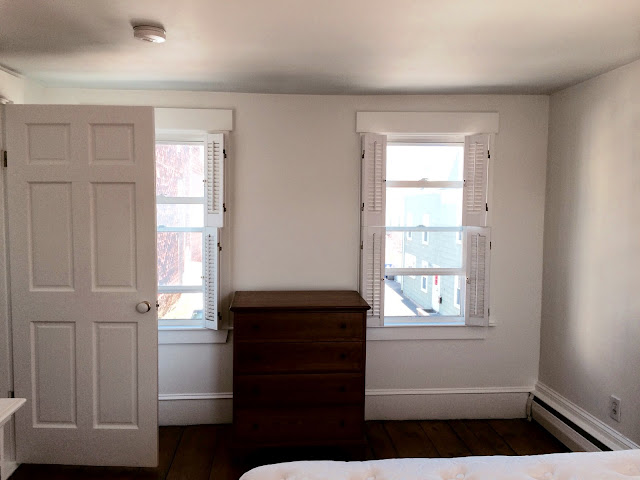 This is a photo of the West side of the room.  It's been difficult to get good photos of this room for some reason.  Ever since the iOS8 iphone software update, it seems like the quality of iphone photos isn't what it used to be. 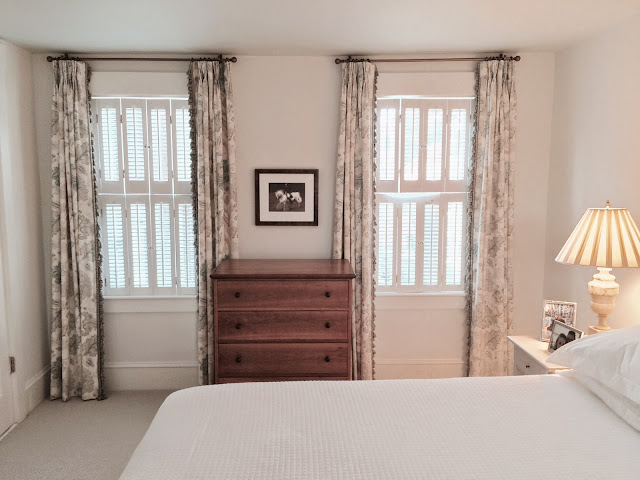 Here's the after shot.  The colors are a bit washed-out in the photo, so the drapery fabric looks muted. The fabric is a blend of ivory, soft aqua, taupe and a touch of butter.   That's Jon's cherry wood dresser in the photo.  I'm not a fan of dark wood, but he loves his furniture and it's beautifully made, so there it is.  I chose the bronze finish on the drapery rods to complement with the wood dresser. 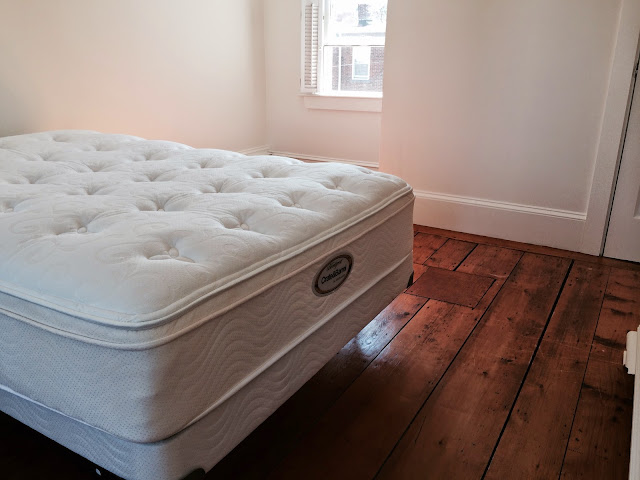 This is the before photo of the East side of the room.  Notice the lovely patch in the wood floor.  I have no idea why there would have been a gaping hole in the floor at one time. 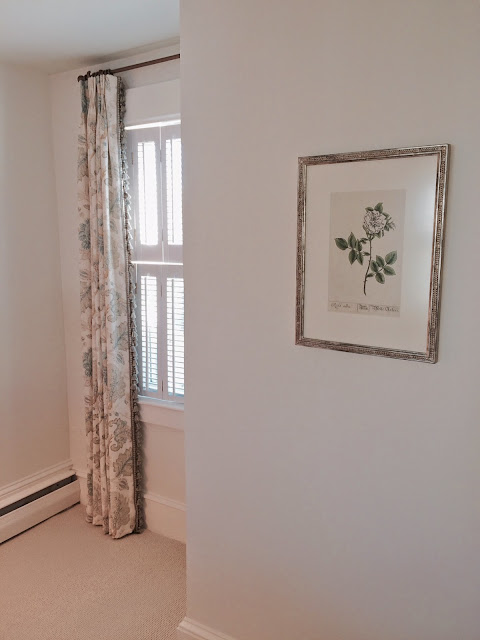 Much better, don't you think?  I bought the antique botanical on eBay years ago for about $20 and finally had it framed.  I chose a custom white gold-leaf frame with blue highlights in a floral and vine motif.  It's so nice to have found just the right spot for this print. 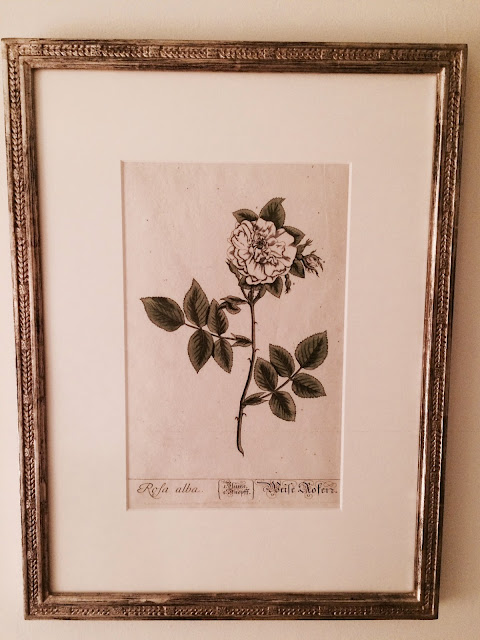 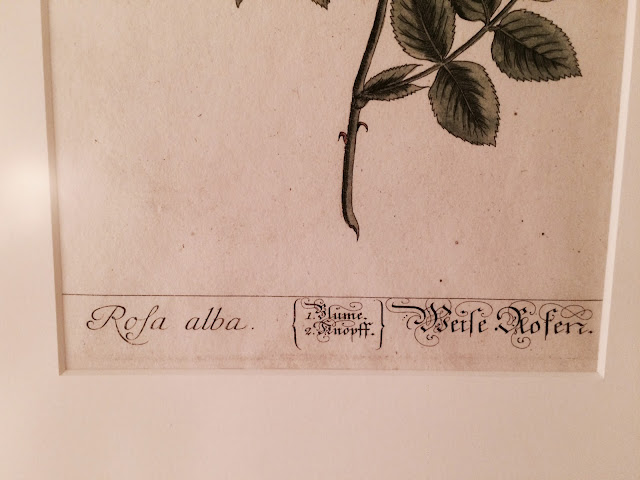 The script at the bottom of the print always intrigued me. 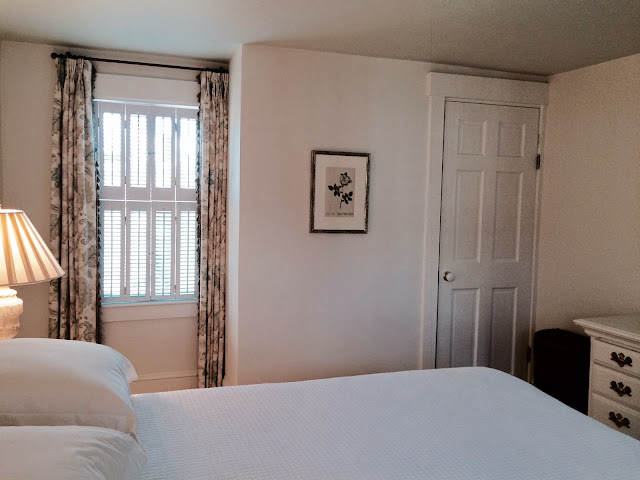 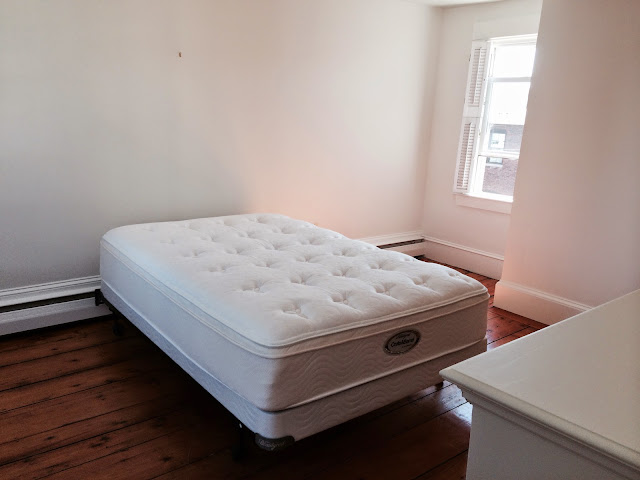 We bought a new bed too as this one was too small for us.  This photo was taken after we painted the walls and trim.  I'm so glad the pine floor is gone!  Some people will think I'm crazy for covering original pine floors with carpet, but trust me.  The floor looks much better in the photos than it did in person. 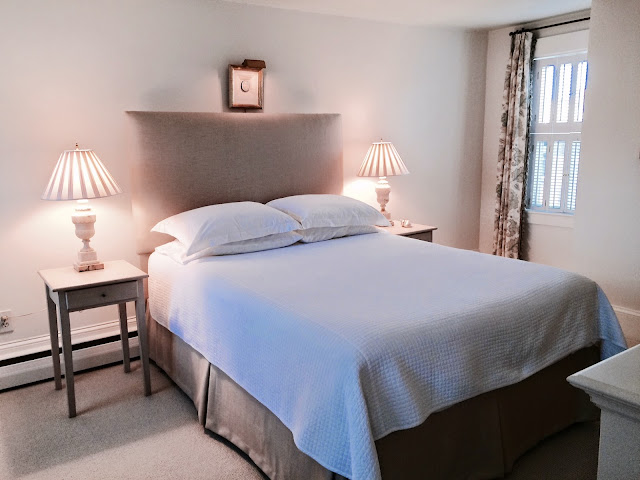 This photo is too light, but at least it shows the finished room.  I had a headboard made in a wheat-colored fabric with a matching bed skirt.  The alabaster lamps are from Brimfield--purchased about 15 years ago.   I thought about selling them, but kept them and bought new silk pleated shades for them.  The lamps had been in the living room and they look much better here. 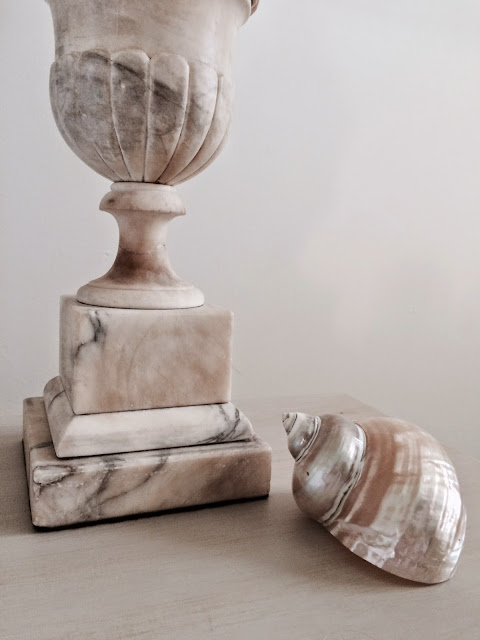 The veins of the marble / albaster look black here, but they're actually a soft gray. 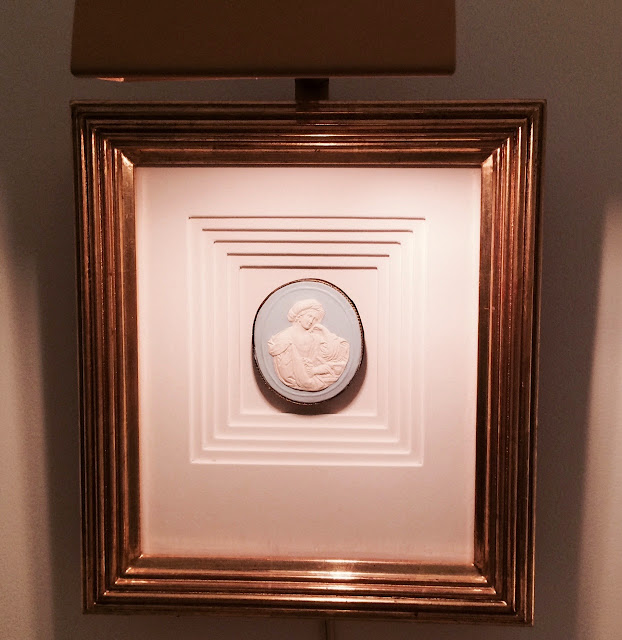 This framed cameo hangs above the bed.  Jon bought it for me after we were married.  We bought a picture light for it, which accents the unusual layered matting and gold-leaf frame. 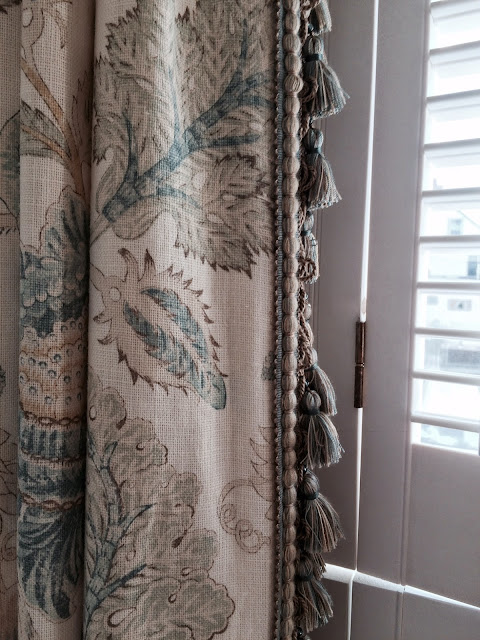 I wish the color in the photos was better.  Above is a close-up of the linen drapes. 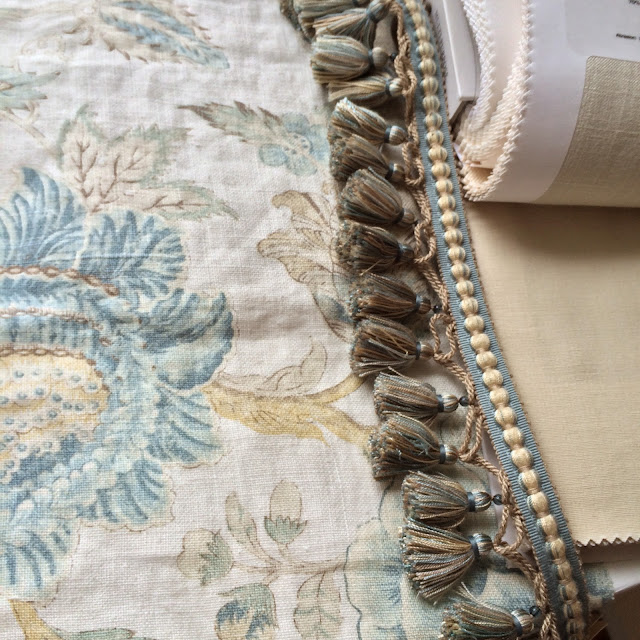 Finally, here's a photo that shows the true color of the drapes and trim.  I didn't originally plan to use trim, but once I saw it with the drapes, I was sold.  It really dresses up the room.  The butter-colored fabric on the right was used to make a Roman shade for the hall window.  I had the same trim attached to the bottom of the Roman shade. 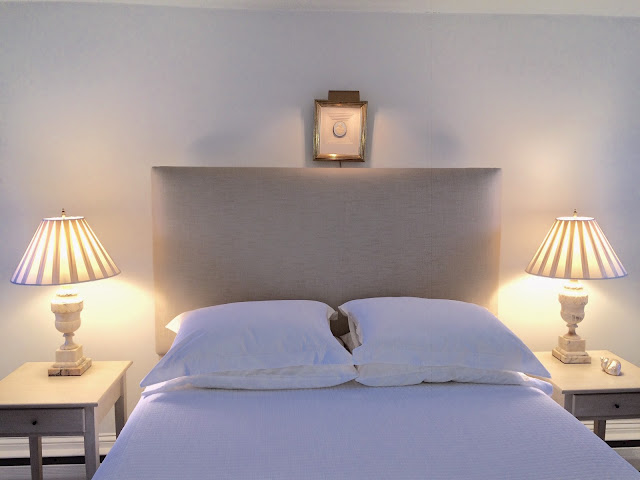 So that's our new bedroom.  I'm pleased with how it turned out. I made some changes in the living room too and will post about it soon.  Thanks for following along!