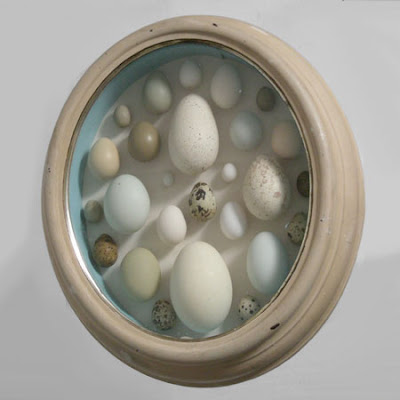 When I don't have time to go antiquing, one of my favorite things to do is a little virtual antiquing at http://www.1stdibs.com/, which everyone in the interior design blogosphere knows well. I was browsing the 1st dibs shop of Andrew Spindler when I saw this 19th century shadow box with bird's eggs. It is reminiscent of the 19th century bird's eggs prints that are so popular now. Andrew Spindler's shop in Essex, Massachusetts (about 40 minutes north of Boston) features unique antiques with artfully arranged window displays and a calming, uncluttered interior: neutral colors, a large collection of white ironstone, sisal carpeting, giltwood, and linen upholstery. One of these days, I may have the nerve to ask Mr. Spindler if I may take photos of his shop to show you more.
The shadow box with eggs inspired me to search 1stdibs.com for other egg-shaped, egg made, and eggcentric items I could find. The number of results were surprising and this is only a sample of what's available.
This may be my favorite of the group. It's a 19th century French iron heron stand from Linda Horn with an egg shaped topiary. I could picture this on my terrace, were it not for the price tag. 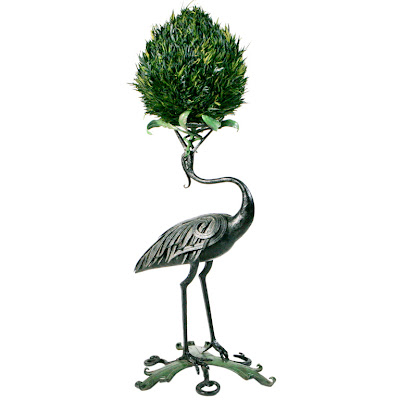 This is a wooden six-armed candelabra from Pat McGann. It's Italian early 20th century and features a large central egg-shaped wooden orb with tassels on each arm. This would be fun for a breakfast room if there were an electrified version. 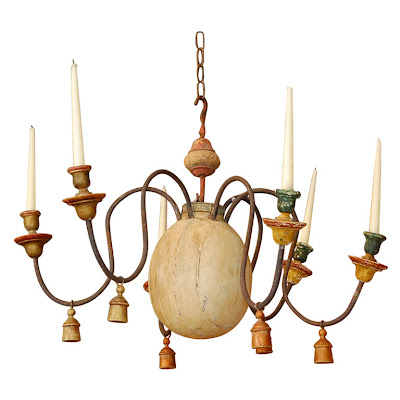 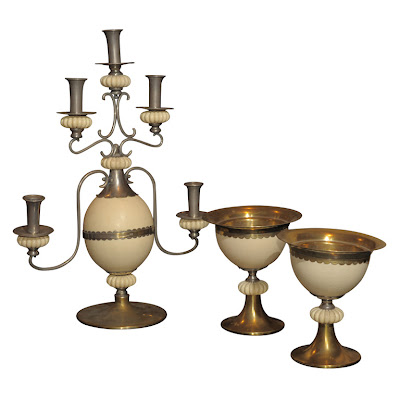 Arne Jacobsen 1960s egg chairs are widely available, but the rich carmel color of this one from 1stdibs Paris stands out from the rest. 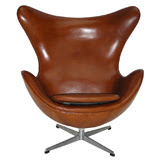 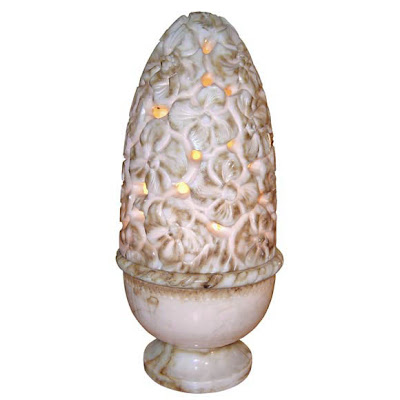 Due to their shape and large size, ostrich eggs lend themselves quite well as lamps. This is a bronze ostrich egg lamp with a marble base and gilt bronze detailing, mid 20th century France. It's available through Boston designer Charles Spada's showroom, Antiques on Five, which is one of my favorites. Although the showroom is "to the trade only" and I'm not "in the business", it's always a treat to browse the website. 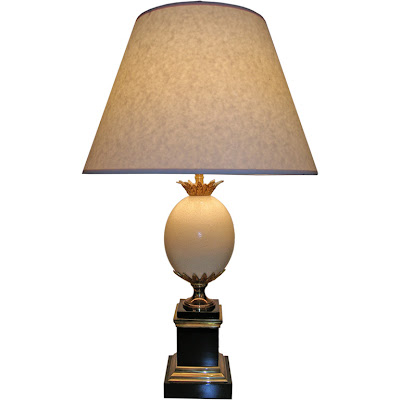 I gravitate to curious objects under glass cloches when visiting antiques shops. The objects are either too precious or too objectionable (think taxidermy) to touch. But, in this case, it's a delicate "Still Life with Eggs" from Vincent Mulford with blown glass eggs in a pressed glass compote. 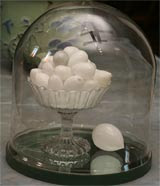 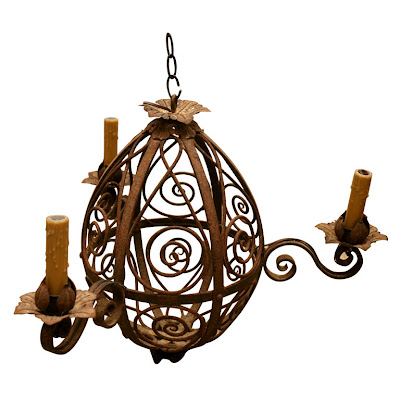 This 1950s Italian modernist chandelier is a too contemporary for my taste, but I appreciate the design. Featured at Van der Akker it's not an egg, but an "egg shaped satin finished glass light diffuser, surrounded by a black metal cage-like structure by Stilnovo, circa 1955". A card with the crib notes version of this description will be necessary for the eventual owner of this fixture. 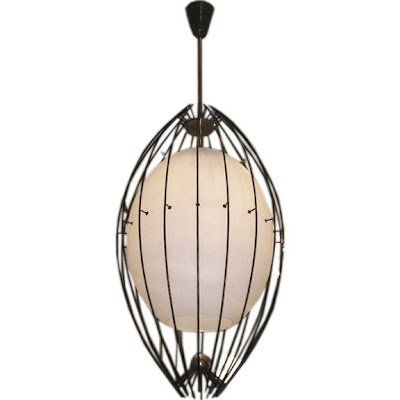 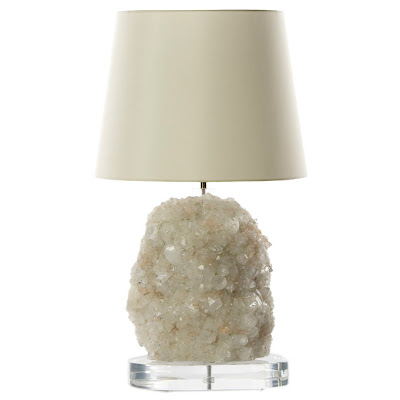 There are also a few far-out finds such as this cement egg jardinere from T.C. Donobedian. Some pretty white tulips would certainly help bring this down to earth. 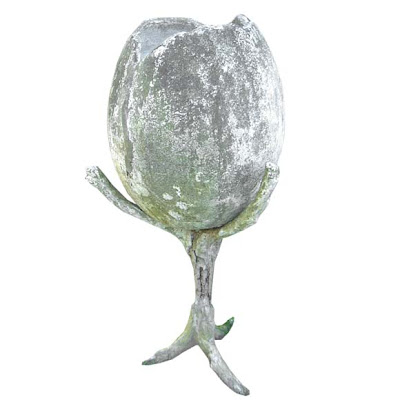 Or, this interesting hand-crafted French 20th century ostrich egg chandelier. At $20,000, this is far-out indeed.

All images http://www.1stdibs.com/
4 comments:
Email ThisBlogThis!Share to TwitterShare to FacebookShare to Pinterest 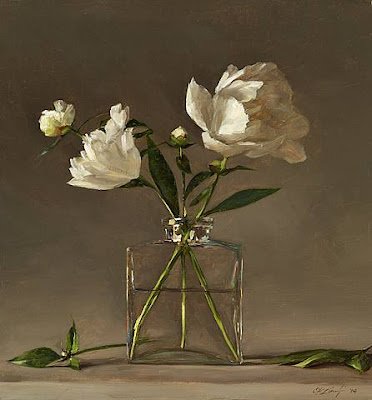 I recently discovered these incredibly beautiful paintings by artist Sarah Lamb. My initial description was "the talented" artist, but I realized it was unnecessary to say this woman is talented. It seems redundant to describe what one can clearly see. 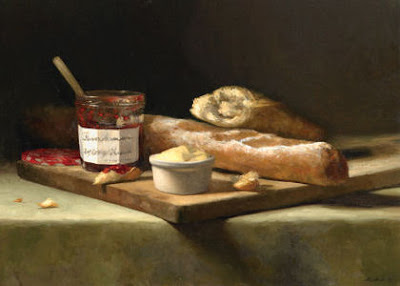 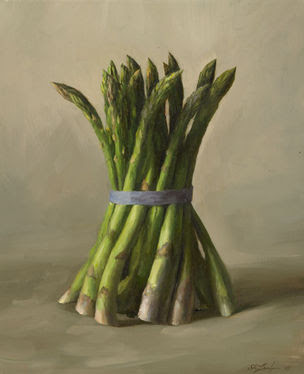 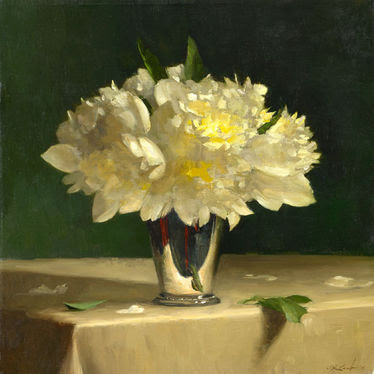 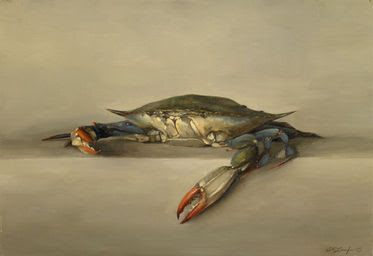 "Portrait of a Crab" 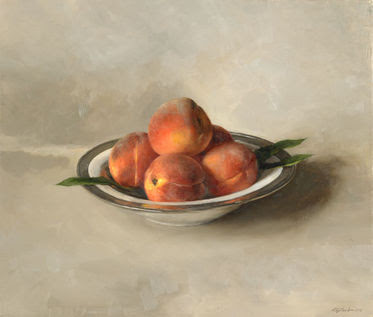 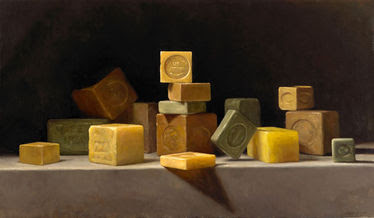 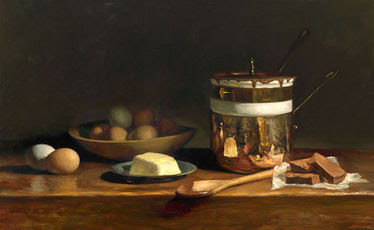 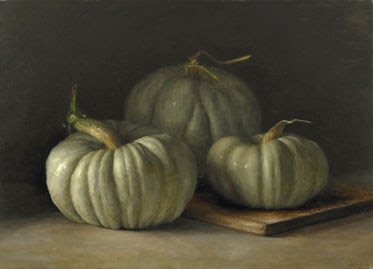 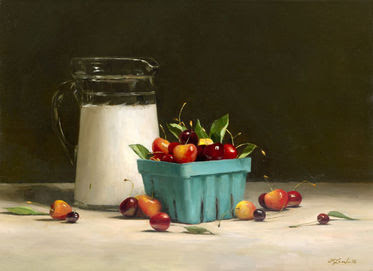 My small terrace will soon undergo a bit of a makeover--and I do mean "a bit", since there's not much of a budget to work with these days. I am inspired by these photos of a garden in Houston, Texas designed by Timothy Adcock. I love the formality and dense green foliage of this particular planting. The leafy overhang is coral vine and creeping fig covers the brick wall. Not sure if these plants would grow in New England, but they are beautiful. Asian jasmine grows at the bottom of an antique painted terra-cotta urn.

The terrace features a large sitting area perfect for dinners and parties, although the gas grill must be hidden! I especially like the chair in the foreground. Neatly trimmed boxwood in planters softens the brick and what appears to be slate pavers. This spot would be an oasis in any city. 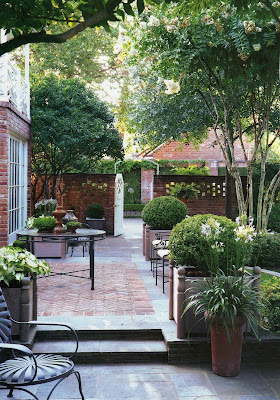 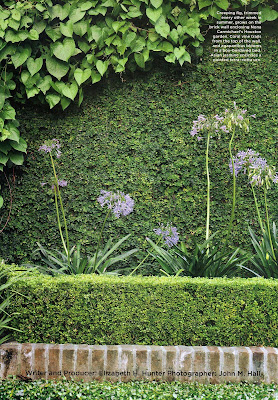 More boxwood below with the addition of agapanthus blooms. Apparently, the creeping fig on the brick wall requires a trim every two weeks during summer. Hmmm. No hired help or gardeners here at Boxwood Terrace (never has been and never will be for that matter!). Nonetheless, these photos have provided inspiration for my outdoor space which will include plenty of foliage, zinc-style and wood planters, terra-cotta, purple and white blooms and of course....boxwood. And best of all, no gardener required.

All Photos Above by John M. Hall
4 comments:
Email ThisBlogThis!Share to TwitterShare to FacebookShare to Pinterest
Labels: Gardens 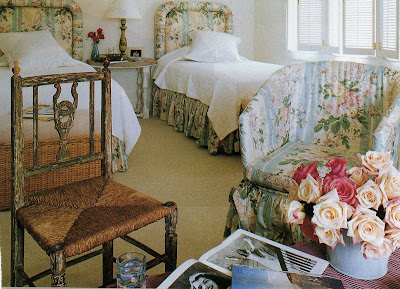 Clipping from a magazine, but I cannot remember which one!
I've never cared much for chintz fabric, but lately something has changed in me. It's spring--full of promise, sunshine, blue sky, bright colors, and longer days leading to summer. Maybe it's time to bring a little spring indoors.
2 comments:
Email ThisBlogThis!Share to TwitterShare to FacebookShare to Pinterest
Labels: Decorating
Newer Posts Older Posts Home
Subscribe to: Posts (Atom)