Storage before Walk-In Closets and the Stainless Steel Fridge 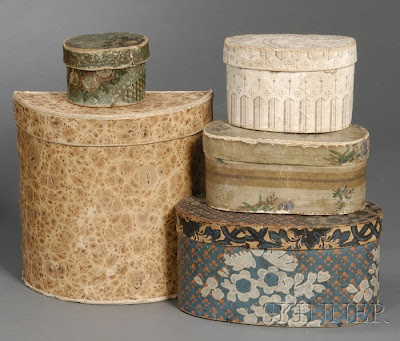 Whenever I read a book that's set in the 18th or 19th Century I'm always most curious about how the subjects lived day to day. It's fascinating to read about what people wore, what they ate and what the interiors of their homes looked like.
In the days before walk-in closets, people stored their lace ruffles, neck bands and collars in colorful bandboxes.
These examples of 19th Century bandboxes can be found on Skinner's website, which is a Boston auction house for antiques and fine art. The boxes were sold at Skinner's most recent auction of American Furniture and Decorative Arts.
The paper on the large box on the left looks like birds eye maple to me and I'm drawn to the creamy white color of the small box on the upper right. All of the boxes shown here were made by Hannah Davis of Jaffrey, New Hampshire during the last quarter of the 19th Century and her label is affixed to the interior cover of each box. I imagine that if Hannah Davis were here today, she'd be blogging away like the rest of us about interior decorating, storage, furniture, paint color and wallpaper
. 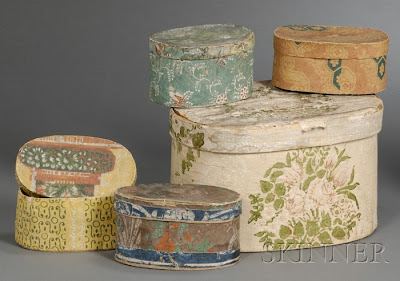 The large box on the right in this photo is my favorite of the group with it's pretty floral paper. Bandboxes originated in France and the paper used to cover the boxes were wallpapers made of vegetable and mineral dyes. 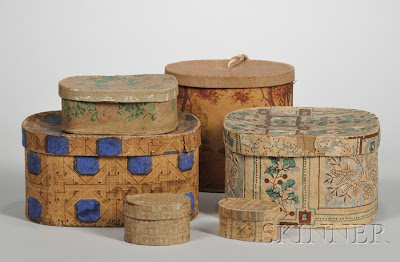 A few of the boxes in this photo are from the early 20th Century, although the website did not specify which boxes were from that era. I'm struck by the design of the box on the left which looks like caning with vivid cobalt blue squares. It's such a unique design and combination of colors. 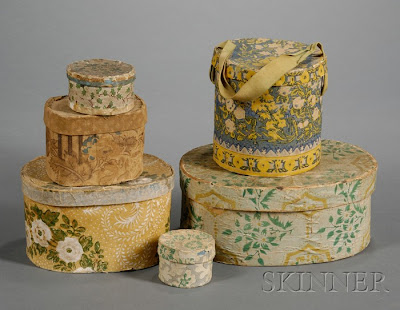 Here's a group which includes a box with its original ribbon. I even found an article from 1912 in The New York Times titled "History in our Grandmother's Bandboxes." It's a fun read if you'd like to learn a little more about these sweet old treasures. 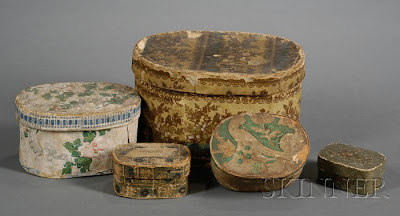 Another favorite of mine in this group is the box on the left with the soft gray background, pink flowers and bright blue trim on the top of the lid. I can imagine designing a feminine bedroom around this box. 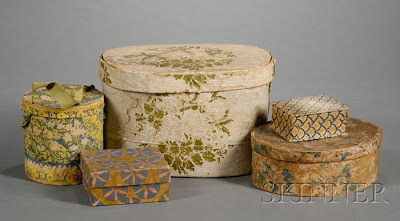 Here's the the last of the bunch with my favorite being the small square blue and gold box on the right. It almost looks like end papers you'd see in an old book or even a contemporary print on a fabric you could find today. 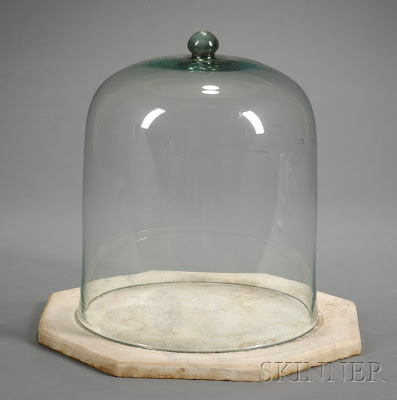 And how about an example of 19th Century kitchen storage? Pictured above is a charming 19th Century cheese plate with a glass dome. It's a unique piece and with a low auction estimate, I toyed with the idea of placing an online bid for it. It seemed romantic and quaint to keep a wedge of Brie, St. Agur Blue, Explorateur and other fancy cheeses in this beautiful antique, which could sit proudly on my kitchen counter. But, in the end I decided against bidding. Good thing, too as the cheese plate actually sold for more than I paid for my refrigerator. Saran Wrap and a zip lock bag are just fine for my cheese after all, thank you very much.